Collection of books designed by the 20th century typographer and designer, Bruce Rogers 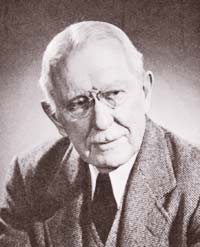 "No printer has shown as great versatility and variety in his work as has Mr. Bruce Rogers...Designing his own types, as many printers did until the seventeenth century (and cut their punches as well), drawing or engraving his own initial letters and headpieces, designing his bindings, in addition to laying out his books, the volumes of Mr. Rogers are as distinctive as those printed at the Kelmscott, Doves and other English presses.  What Mr. Rogers has done, however, is a far greater achievement than that accomplished by any of these presses:  for one thing, and this is an important point, his books are meant to be read, and are not merely objects d'art."--------A.E. Gallatin, Modern Fine Printing in America, New York: Privately Printed, 1921, pp. 11-12.

Bruce Rogers was born in LInwood, Indiana in 1870, and graduated from Purdue University in 1890.  His career as a typographer and designer of books lasted for more than 60 years, and during that time he designed for noted presses in both England and the United States, including the Riverside Press, the Cambridge University Press, and the Harvard University Press.  Known to colleagues simply as "BR," he was honored with degrees from Harvard and Cambridge as well as the American Academy of Arts and Letters, and continues to be known for the beautiful and distinctive "Centaur Type" which he created.