A guide to the titles in the Rare Book Room published by the Golden Cockerel Press. 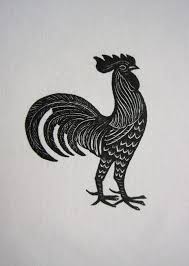 Most owners of printing companies print what they are paid by publishers to print.  But, think of how much fun it would be to be able to just print what you wanted, when you wanted.  Of course, you’d want to make a profit, but to really be able to design and print a really fine book with that being the real goal….

Private presses do that, and some of the treasures in the Rare Book Room were printed at a noted turn of the (twentieth) century English firm, the Golden Cockerel Press.  Established in London in 1920, the Golden Cockerel Press had three owners during its history, but the most notable was Robert Gibbings, under whose leadership it became known as one of the fine private presses.  Beautiful typefaces, handmade paper, woodcuts and engraved illustrations…all are represented in our Golden Cockerel Press editions, and Davidson can thank Dr. Harold Marvin, class of 1914, for donating to us many of the beautiful limited edition volumes he collected.