A guide to archival and special collections materials related to the history of women at Davidson College and in the Town of Davidson. 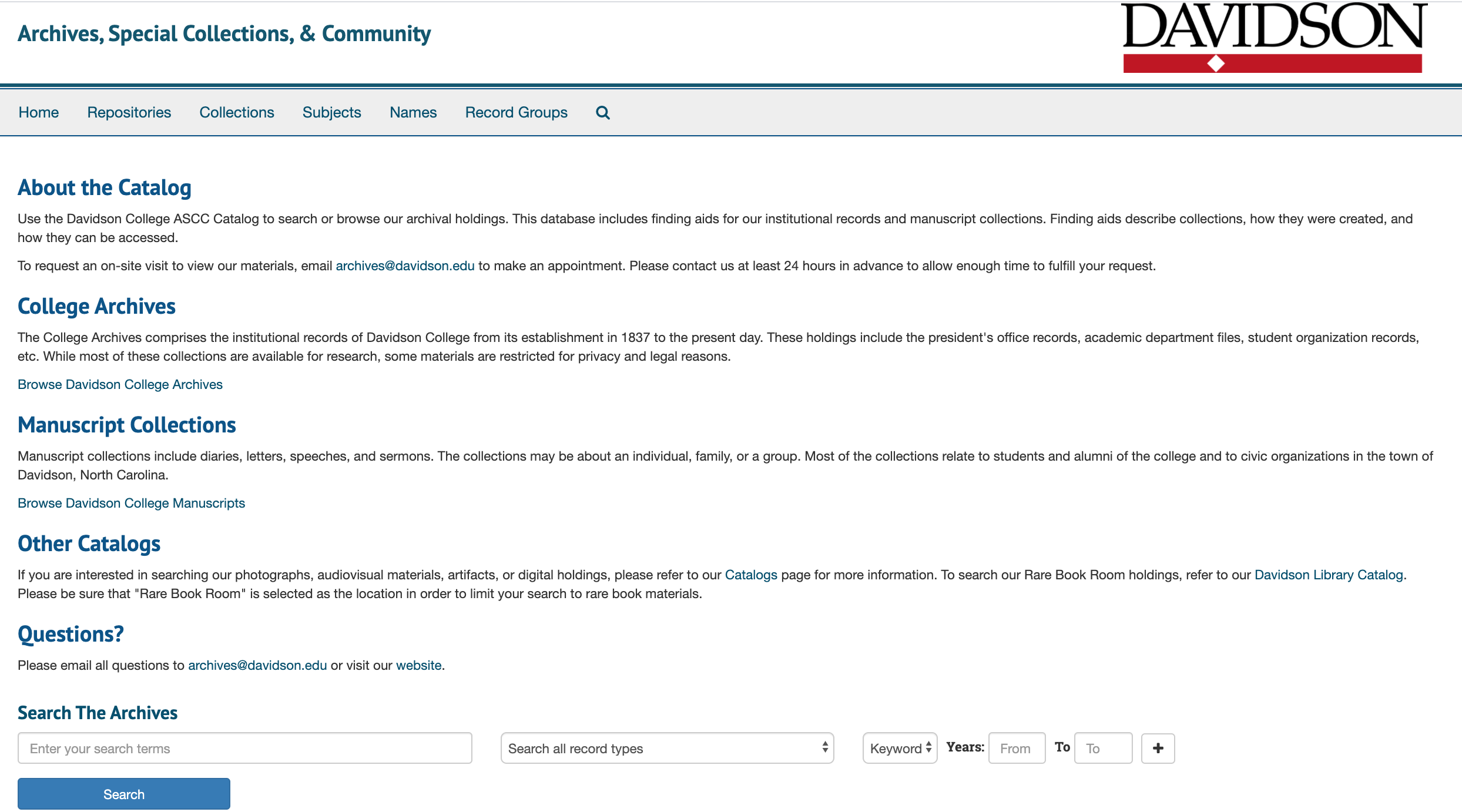 A selection of D-Files related to 19th century women's history at Davidson include: 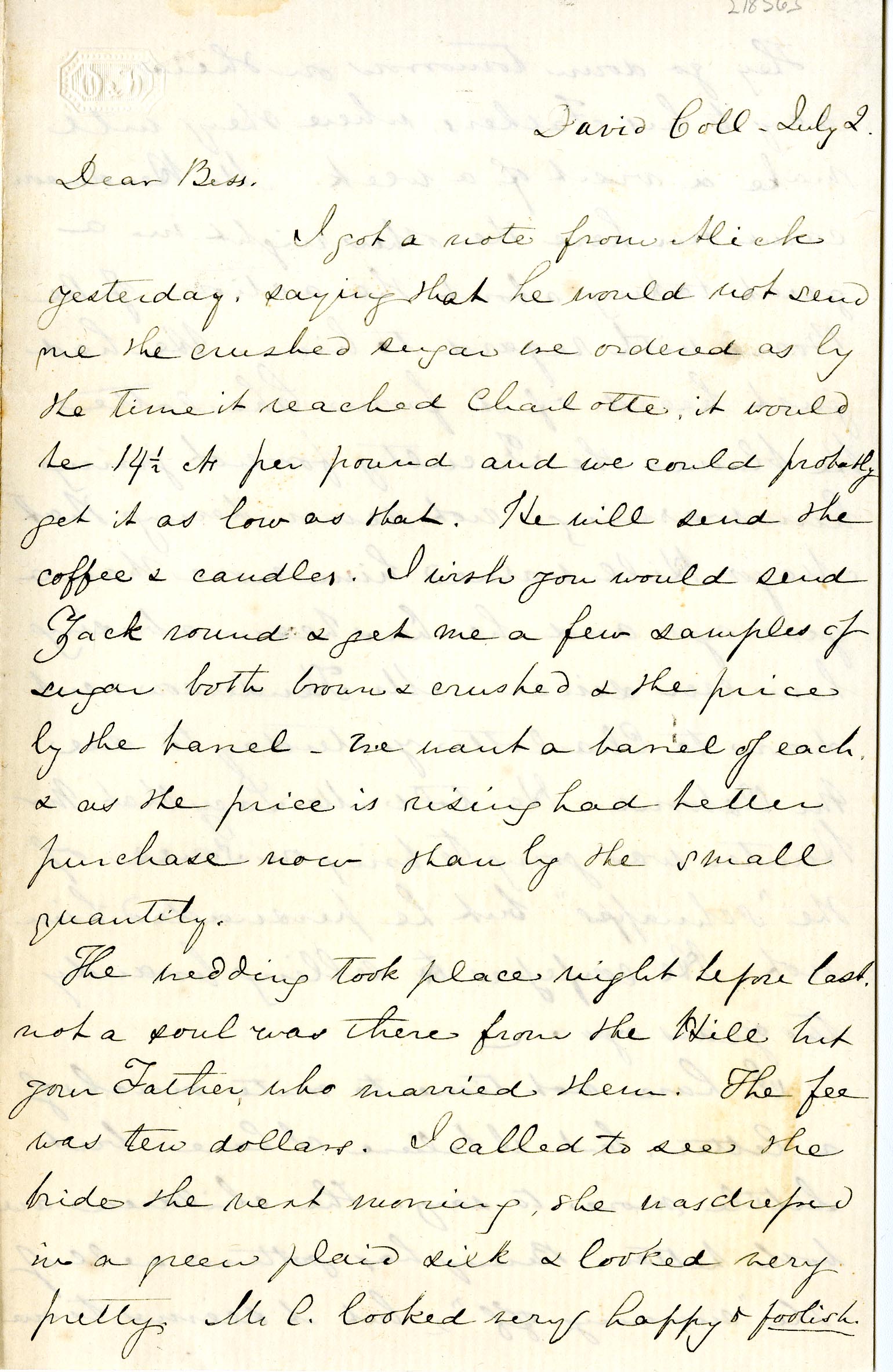 Mary Lacy was the the wife of Rev. Drury Lacy, President of Davidson College from 1855 until 1860. Archives and Special Collections holds a collection of Lacy Family Papers (DC0147s), which includes correspondence from Mary Lacy to her stepdaughter, Bess.

In Spring 2017, these letters were digitized and transcribed by students from History 306: Women and Gender in U.S. History to 1870. Their work can be found here on this website.

In the 19th century, Davidson was primarily an all-male school. Almost all student, faculty, and staff members were men, with a few exceptions. As students, the first women who attended classes at Davidson were Davidson College President John Kirkpatrick's daughters in the 1860s. During this time, women attended classes "by courtesy" of the faculty, not as actual students. By the 1890s, a few women began attending classes at Davidson, including Blanche Dupuy, Lucy Martin and Annie Brown.

As faculty and staff, in 1858, Ann Brown was the first woman employed by the college and served as college steward who oversaw the college’s dining hall and guest house. Beginning in 1896-1897, Eulalia Cornelius and Gertrude Williamson, were the first women to "teach" at Davidson. Both women privately taught Davidson students music lessons; Ms. Cornelius taught voice, and Ms. Williamson taught guitar and mandolin classes.

Listed below are select resources related to 19th century women's history at Davidson.

In Fall 2019, Archives and Special Collections collaborated with the course "History 306: Women and Gender in U.S. History to 1870" and created a research guide with materials from our collection related to 19th century women at Davidson College and in the Town of Davidson. Students from this conducted archival research in Archives and Special Collections and wrote blog posts about materials in our collection.

For more information about archival materials used in this course and blog posts written by students, please explore the links listed below. 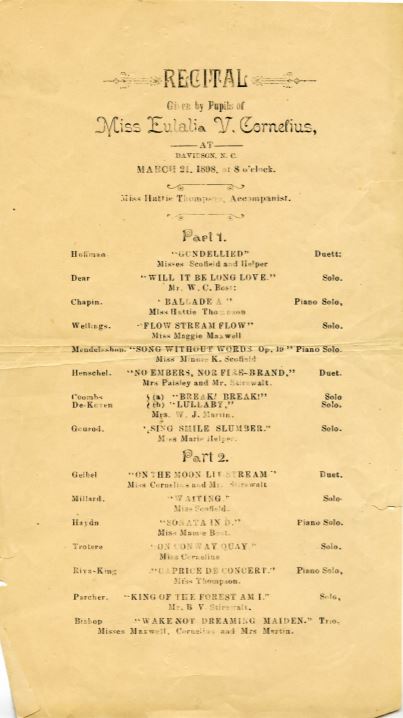 Some relevant manuscripts collections used in this course include:

Description: Lucy Phillips Russell was the daughter of Davidson College professor Charles Phillips. She moved to Davidson with her family in 1868. She became a school teacher in Rockingham, North Carolina and married M.H. Russell in 1883. The collection consists of a handwritten account of life in Davidson in the 1870s and copies of newspaper articles "A Girl of the Seventies" written by Russell.

Description: In 1896, two music classes were organized in the town of Davidson, NC. The vocal class was taught by Miss Eulalia Cornelius, of Statesville, NC. Student from Davidson also took her classes. The collection consists of one program from an 1898 performance.

Description: In 1880, the ladies of the Davidson College Presbyterian Church felt it their duty to form a group to help spread the "words of Eternal Life." To this end, they formed the Ladies Benevolent Society. After numerous name changes, in 1948, the group changed its name to the Women of the Church. The group is a subset of the Davidson College Presbyterian Church and works with local and national women's organizations in Christian endeavors. Materials in this collection include meeting minutes, financial reports, membership books, and scrapbooks.