Using Sources & Avoiding Plagiarism: The Ethical Use of Sources 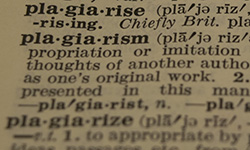 Plagiarism: using another’s textual, numerical, visual, digital, or sonic material without attribution, giving the appearance that such material is of one’s own creation.

Whether deliberate or the result of negligence, not to acknowledge the use of another’s work will be perceived as an act of deception called plagiarism: using another’s numerical, textual, visual, representational, or sonic material without attribution, giving the appearance that such material is of one’s own creation. We are not talking about a citation error (such as placing a period instead of a comma between the author’s name and the title of the work in a bibliographic entry, or using the author’s last name rather than Ibid. in a footnote). We are talking about others’ work that is presented so that by all appearances, the reader assumes that it is your own. Regardless of a writer’s motives or intentions—whether carelessness, unintentionality, or fraud is involved—a reader who discovers that you have used uncited texts, data, or other forms of representation in your work can rightfully find this an instance of plagiarism, sanctionable as an Honor Code violation.

To avoid honor code charges, keep this simple motto in mind: “When in doubt, cite.”

Even if you are unsure of the correct form for the citation, at a minimum, note the author’s name and the title of the work. In such a scenario, you will likely have an opportunity to correct your citational error, but you cannot be charged with plagiarism if you provide evidence that data, a term, a phrase, or a passage of text is not your own.

Making use of and acknowledging sources is guided by rules established and adhered to by communities of writers and readers. U.S. news organizations follow certain rules for attributing direct quotations to their sources, rules that differ from the traditions ethnographic researchers agree to enact in attributing the direct quotations they make use of. Each group of practitioners form organizations that guide the ways in which its members document their work. The MLA offers guidelines for acknowledging sources that differ from those upheld by the APA.

Though, in a general way, these organizations’ guidelines all aim to make clear the exact sources being deployed in texts, the micro-details for doing so differ: The Modern Language Association (MLA) requires its members to put the place of publication in parentheses, but the Chicago Manual of Style does not. MLA requires its members to use a block quote when making use of a source passage of four or more typed lines; Chicago style’s cut-off is five lines of typed text. The only way to master these details is to consult the guidelines. If you don’t do so, it’s easy to make mistakes since almost no one can hold all of these details in mind—even the most seasoned professionals. The errors that one may make in imitating these organizations' citational formats do not constitute plagiarism. They are akin to grammatical or mechanical errors writers may otherwise make, and should be corrected by way of scrupulous editing.  Your professor may take errors into account in assigning your grade, but you will not be charged with plagiarism for these infractions.

Plagiarism, as stated earlier, is a form of fraudulent behavior, an act of deception, and an ethical transgression. Though you may inadvertently forget to cite a word, phrase, passage, data, or other visual or sonic material, a lapse in citing remains plagiarism in the eyes of others. Lack of intention is not a defense for plagiarism. Rarely (if ever) do “mitigating circumstances” (forgetfulness, sloppiness, inaction) come into play in modifying a charge. If you steal, you are considered a thief, whether you intended to steal or to be seen as a thief or not.  In effect, all of us are “on notice” when it comes to citation.  It is a deeply-valued social ethic that signals our respect for one another.

Other Forms of Plagiarism

You also will be charged with plagiarism if you